A “Too-Tall” Medical Tale: Christine Cosgrove, co-author with Susan Cohen of the new book “Normal at Any Cost: Tall Girls, Short Boys, and the Medical Industry’s Quest to Manipulate Height,” wrote a great piece in the L.A. Times about the history of doctors prescribing DES, a synthetic drug that acts like estrogen, to girls to stunt their growth.

Why? Because decades ago, “if a girl were heading toward 5 feet 8 inches, or, horrors, 5 feet 10 inches, not only would she have trouble finding clothes that fit, she’d have a hard time finding a husband. And in the days when there were few options besides marriage and children for women, well, that left an old maid.”

Thousands of girls, including Cosgrove, took the pills. Some have experienced myriad health problems, and an Australian study found a significant decrease in fertility among those who were treated.

Check out more about the book. Here’s an interview with the authors.

America’s Back — Now What?: Linda Hirshman and Gloria Feldt wrote a commentary on the significance of the U.N Cairo + 15 meeting:

On March 31, State Department Acting Assistant Secretary for Population, Refugees, and Migration, Margaret Pollack, told delegates to the United Nations Commission on Population and Development, meeting in New York, that America was back.

Marking a 180 degree turnaround from Bush administration policies that fought international efforts to enable people to control their own reproductive fate, the U.S. will once again defend the “human rights and fundamental freedoms of women” and support “universal access to sexual and reproductive health.” […]

The global sigh of relief was palpable. For with all its money and diplomatic resources, the U.S. is the 10,000 gorilla in international reproductive policy. Now the question is, while this is certainly change we can believe in, is it all the change we need?

Film Critics Write Off Rape: Tiger Beatdown has a great analysis of the new Seth Rogen film, “Observe & Report,” and the reviews that give a pass to the rape scene. At least New York Times film critic Manohla Dargis will restore your faith. Rachel points to more links.

Why Women Stay: Hilzoy at Obsidian Wings has written the must-read post of all must-read posts about why women stay in abusive relationships. As one commenter put it, “If I always had a hilzoy around to explain it, I think I could understand every human phenomenon in the world.”

Johns Hopkins Bans Free Drug Samples, Gifts to Doctors: “Johns Hopkins is the latest big name in health care to try to restrict doctors’ ties to the drug and device industries,” reports the Wall Street Journal. “Its new policy ‘on interaction with industry’ bans free drug samples and says doctors can’t participate in consulting gigs in which they’re essentially paid for not doing anything.”

Plus: Iowa Republican Sen. Charles Grassley asked a nonprofit mental health organization about its funding as part of his investigation into drug company influence, reports Bloomberg.

Everybody Hurts Sometimes: “Long lines come up frequently in the American healthcare discussion, the symbol of all that is to be feared about a government-run system,” writes Ezra Klein on the L.A. Times op-ed page.

And it’s true that in Canada and Britain, the two countries most often cited in discussions of what nationalized healthcare might mean, some patients report having to wait months for some elective treatments. Sometimes.

But we’ve got waiting lines too — along with 50 million uninsured and a system that costs more than twice as much per person as that of any other country. We’ve just managed to hide our lines through clever statistical gimmickry.

Debate Over Digital Health Records: The Obama administration maintains health information technology is as an essential, cost-savings component of health care reform and has set a goal for every American to have an electronic health record by 2014. But critics fear the money to implement the system will be wasted if doctors and hospitals can’t share information, reports USA Today.

“We could head for a techno-Katrina,” said Sen. Barbara Mikulski, D-Md. “I do not want to do that, where we do a dollar dump, and at the end of the day, we have a lot of microchips floating around.”

Vitamin Sales Up as Economy Falters: “Sales of vitamins and nutritional supplements, which have grown consistently for years, have surged in recent months, rising as the stock market has fallen,” writes Alex Williams in The New York Times. “People are clearly cutting back on many items, from bread and milk to designer jeans and flat-screen televisions, but they are stocking up on pills that they think can spare them expensive doctor visits.” 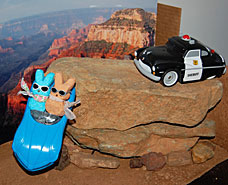 My Peeps: We end on a colorful note — Tis the season of the peeps. The Washington Post displays its 40 finalists here; don’t miss Peep/Tuck and Thelma and Louise: Peeps on the Run.

The winner of the Chicago Tribune contest created an imaginative Wizard of Peeps. And for political junkies, check out this portrayal, at TwinCities.com, of the Minnesota U.S. Senate Trial between Al Franken and Norm Coleman.