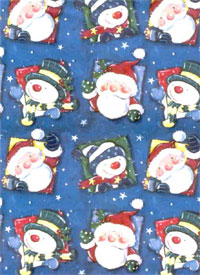 First, An Important Announcement: Don’t burn the gift-wrapping paper. In case you didn’t know, it’s bad for you. And remember to check new toys for lead.

New Reconstructive Surgery Options Not Discussed: Women undergoing reconstructive breast surgery are often not told about the full range of options available to them, reports The New York Times.

For instance, there is a new procedure that involves transplanting a wedge of fat and blood vessels from the abdomen or buttocks, which would be refashioned to form new breasts. This procedure is more complex and less profitable for doctors than breast implants.

To raise awareness of breast reconstruction and to market it to patients, the American Society of Plastic Surgeons has adopted the vocabulary of the movement to support a woman’s freedom to choose an abortion, adjusting it for women with breast cancer. Although women “don’t choose their diagnosis, they can choose to go ahead with reconstruction or not, and with the aid of a knowledgeable plastic surgeon they can choose what their options might be,” Dr. Linda G. Phillips, a plastic surgeon in Galveston, Tex., said in a telephone news conference organized by the plastic surgery society to mark Breast Cancer Awareness Month in October. “Then they have that much more power over their lives if they have that power to choose.”

But for many patients, the options may be limited because their doctors are not proficient in the latest procedures. Dr. Michael F. McGuire, the president-elect of the American Society of Plastic Surgeons, said it is not unusual for surgeons to omit telling patients about operations they do not perform.

Single-Payer Health Care Unlikely: “President-elect Barack Obama said at a town-hall meeting in August that he would ‘probably go ahead with a single-payer system’ if he were designing a system from scratch. But that’s not anywhere close to what he’s been advocating,” reports NPR. Congress seems to feel the same way.

That frustrates single-payer health plan advocates like David Himmelstein, an associate professor at the Harvard Medical School and co-founder of Physicians for a National Health Program, which has been advocating for a single-payer model since the late 1980s.

HHS Rule Could Override Plan B Protections: “New federal regulations, set to take effect Jan. 18, could override Connecticut’s law requiring all hospitals to offer rape victims emergency contraception, according to Attorney General Richard Blumenthal,” reports the New Haven Register. “Blumenthal said he plans to fight the federal rule, issued by the U.S. Department of Health and Human Services. It reinforces protections for health care workers and institutions that refuse to provide certain services, such as abortions, for personal reasons.”

Plus: Read more about the new “conscience” rule here. Its one of several Bush-era regulations women’s health activists expect the new Obama administration to overturn.

FDA to Reconsider Plastic Bottle Risk: In August, the FDA concluded that bisphenol-A, a chemical found in numerous plastic products, including baby bottles, water bottles and metal can linings, is safe, despite the fact that many scientific studies have found otherwise.

But that wasn’t the end of the story. As The New York Times reports, the FDA’s science board subcommittee on BPA found that the FDA was wrong to disregard research showing health effects even at extremely low doses. The FDA is now reconsidering its position — which it reached after relying on studies funded by the American Plastics Council.

“This was the F.D.A. finally acknowledging that its assertion that BPA is safe may not be correct,” said Dr. Anila Jacob, a physician and senior scientist at the Environmental Working Group. “Still, we don’t think it’s enough. With millions of babies being exposed to this chemical on a daily basis, every day we continue to delay removing this chemical from baby products is another day millions of infants continue to be exposed.”

*Any other lists or favorite stories you want to share? Add your links in the comments.