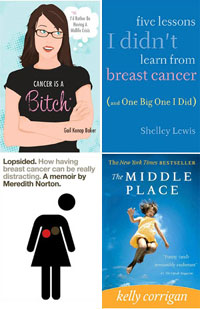 What I Learned From Breast Cancer Memoirs: “Breast cancer memoirs have become such staples — reliably displayed during Let’s Wave Pink Ribbons for Breast Cancer month — that it’s hard to remember a time when women didn’t document their journey from onset through the catalog of treatments to restored health, stabilization, or imminent death. But it wasn’t always thus,” writes S.L. Wisenberg in the Chicago Reader.

True, British author Fanny Burney wrote to her family about the agonizing mastectomy she underwent — without anesthetic — in 1811. And Katharine Lee Bates (whose poem “America the Beautiful” became the famous hymn) wrote to friends in 1915 about her partner’s breast cancer and death. But neither of these works was published in the author’s lifetime. It was only after World War II that prominent American women went public with their tumors. Marion Flexner, wife of a well-known doctor, wrote “Cancer — I’ve Had It” for Ladies’ Home Journal in May 1947, breaking a taboo by refusing to euphemize her condition — and even inserting a little slapstick with a passage describing “roving boozies”: prosthetic breasts that escaped the confines of a bra and fell to the floor.

It’s a terrific essay, and it makes this reader eager to read Wisenberg’s own story, “The Adventures of Cancer Bitch,” due out in March from University of Iowa Press. In the meantime, visit her blog.

Healthcare Overhaul: “Mindful of how delays sapped the political will to overhaul healthcare during the Clinton administration, health advocates hoped to get a major bill during the new administration’s first 100 days,” reports the Boston Globe. “Now, it looks like it will take longer, and some observers fear that a historic opportunity could be missed.”

Family Planning Nursing Program Saved in Washington: “A campaign by Planned Parenthood to save a program that provides family-planning services in welfare offices has apparently worked, for now,” reports the Yakima Herald. “The Community Service Office (CSO) Family Planning Nurse program, which houses 70 nurses statewide at 58 Department of Social and Health Services offices, will stay open through June. Previously, DSHS planned to shut down the service Jan. 30.”

Split Over Abortion-Reduction Tactics: “The election of a pro-choice administration and a Democratic Congress has divided the pro-life movement, between those who are preparing for the fight of their lives and those who see an opportunity to redefine what it means to be pro-life,” reports Newsweek.

Plus: Red Sex, Blue Sex: Back in November, The New Yorker looked at another type of divide:

During the campaign, the media has largely respected calls to treat Bristol Palin’s pregnancy as a private matter. But the reactions to it have exposed a cultural rift that mirrors America’s dominant political divide. Social liberals in the country’s “blue states” tend to support sex education and are not particularly troubled by the idea that many teen-agers have sex before marriage, but would regard a teen-age daughter’s pregnancy as devastating news. And the social conservatives in “red states” generally advocate abstinence-only education and denounce sex before marriage, but are relatively unruffled if a teen-ager becomes pregnant, as long as she doesn’t choose to have an abortion. A handful of social scientists and family-law scholars have recently begun looking closely at this split.

What About …: The delivery of octuplets in Los Angeles this week raised many questions, including: Can a woman breastfeed eight children?

Lawsuit Takes on Higher Insurance Rates for Women: “California insurers are discriminating against women, charging them more for individual health insurance than men, the city of San Francisco maintained in a lawsuit filed Tuesday against the state regulators who govern them,” reports the L.A. Times.

Gender rating is health insurance is also the focus of two bills have been introduced in the California state Legislature to address the issue. If either of the bills is signed into law, the suit may be dropped.

Study Says Common Chemicals May Affect Fertility: HealthDay News reports on a study that suggests chemicals known as perfluorinated chemicals, which are pervasive in food packaging, pesticides, clothing, upholstery, carpets and personal care products, may delay pregnancy. The study appears in the Jan. 29 edition of Human Reproduction and is available online.

These chemicals are being phased out in the United States because of their toxic effects, and are expected to be completely gone by 2010. However, they remain in the environment and in the body for decades, and have been linked to developmental problems.

“These widespread chemicals apparently lower the fertility in couples trying to get pregnant,” said lead researcher Dr. Jorn Olsen, chairman of the Department of Epidemiology at UCLA’s School of Public Health.

Danish women in the study who had with high levels of perfluorooctanoate (PFOA) and perfluorooctane sulfonate (PFOS) took longer to get pregnant, Olsen said.