“Every individual has a right to life… and to the integrity of their person.”

On Thursday, April 8, Sini Sanuman and Healthy Tomorrow — sister organizations campaigning against female genital mutilation (FGM) in West Africa — will hold a screening in Cambridge, Mass., for the film “Secret of the Dawn.”

The documentary covers the story of the organizations’ efforts to stop excision in West Africa, in particular in Mali, in a culturally competent manner.

According to the World Health Organization, approximately 100 to 140 million women are living with the consequences of FGM, also known as female genital cutting, female genital modification, and female circumcision. Internationally, FGM is recognized as a violation of the human rights of girls and women. However, the practice is still prevalent in villages and cities of West Africa.

Within their society, women who have undergone FGM share a bond and are viewed as courageous. The practice also marks a woman as desirable and worthy of marriage. The act involves the removal of all or part of the clitoris and sometimes the narrowing of the vaginal opening — not only to increase pleasure for their future husbands, but for the societal opinion of aesthetically pleasing vaginas. 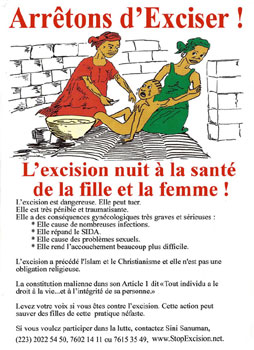 In an interview with Our Bodies, Our Blog, Susan McLucas, secretary general of Sini Sanuman and director of Healthy Tomorrow, said the film “follows a number of threads to show the complexity of the issue of FGM.”

Sini Sanuman utilizes a number of methods in villages in Mali to spread information about the negative health impacts of FGM, including song, dance and music videos.

The organization also recruits religious leaders, village chiefs, and former performers of excision. One video, “I Abandon,” features 17 former excisers who, during the chorus, throw their knives in a hole.

Above is a poster that Sini Sanuman distributes to its network of activists and partner groups. Here it is in French (as it appears in Mali). Click the poster to read the English version.

While this movement recognizes that a major barrier to preventing FGM is the lack of political rights, Sini Sanuman’s campaign focuses on educating people about the medical consequences of FGM, including life-threatening difficulties in childbirth, severe bleeding, incontinence, and high risks of HIV and tetanus.

Sini Sanuman and Healthy Tomorrow have succeeded in stopping excision in nine villages in Mali so far and are compiling a list of more than 300 villages around Mali that have stopped FGM with other NGOs. This list has inspired the government to organize a Forum of Villages in February, which was televised, The forum adopted a resolution encouraging the legislature to pass a law to ban FGM.

McLucas recounts a story about girls who did not undergo FGM singing at the ceremony in the village of Missalabougou, the fourth village to stop the practice.

“They were a chorus of unexcised girls singing about how happy they were to have been spared,” she said. “They couldn’t carry a tune, but it still made very good TV footage and was very moving.”

“Secret of the Dawn” covers the journey of Sini Sanuman in its struggle to stop excision in women across Mali by relating to them through music, their own political and religious leaders, community meetings, and through the experiences of women who live with the consequences of FGM. The movement to stop excision is gaining strength and the hope is that Mali will soon follow the path of its neighbors and outlaw FGM.

The screening will take place at 7 p.m. in the Cambridge Library in Central Square (take the red line to Central Square). Following the screening, McLucas will discuss the film and the Sini Sanuman organization.

June Tsang, an intern at Our Bodies Ourselves, is studying social policy and public health at Brandeis University.