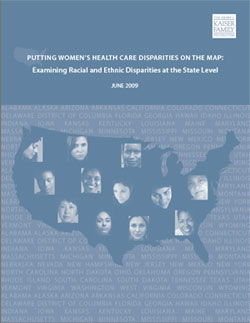 Kaiser Family Foundation has released an important package of resources that shines a spotlight on health disparities between white women and women of color in all 50 states and Washington, D.C.,

The report, “Putting Women’s Health Care Disparities On The Map: Examining Racial and Ethnic Disparities at the State Level,” takes into account 25 indicators, including rates of diseases such as diabetes, heart disease, AIDS and cancer, and access to health insurance and health screenings.

The states with the largest rate of disparities were Arkansas, Indiana, Louisiana, Mississippi, Montana and South Dakota. States such as Virginia, Maryland, Georgia and Hawaii showed relatively smaller disparities between women of color and white women on health outcomes and health care access.

The reports also notes that white women and minority women were doing similarly well in Maine — and similarly poorly in Kentucky and West Virginia.

Among the key findings:

Disparities existed in every state on most measures. Women of color fared worse than White women across a broad range of measures in almost every state, and in some states these disparities were quite stark. Some of the largest disparities were in the rates of new AIDS cases, late or no prenatal care, no insurance coverage, and lack of a high school diploma.

In states where disparities appeared to be smaller, this difference was often due to the fact that both White women and women of color were doing poorly. It is important to also recognize that in many states (e.g. West Virginia and Kentucky) all women, including White women, faced significant challenges and may need assistance.

Each racial and ethnic group faced its own particular set of health and health care challenges.