This is a purely congratulatory post, full of love and cheer and good wishes for our OBOS colleague Kiki Zeldes, who got married Dec. 30 to Susan Galereave. 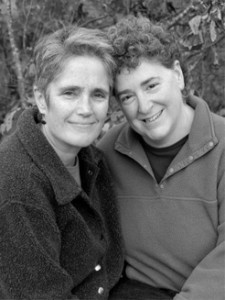 Everyone who has ever fallen in love has a story to tell. Kiki and Susan’s just happened to make the Weddings & Celebrations section of The New York Times. Here’s the best part, as written by Leann Wilcox:

The couple first met in the early 1980s, after being introduced by mutual friends. They did not reconnect until spring 2007, when Ms. Galereave’s daughter, Jasmine, then age 7, and Ms. Zeldes’s son, Jesse, then 6, began playing together at a potluck get-together for single lesbian mothers in Northampton. The moms and kids quickly became a foursome, sharing meals, games and adventures, but it was difficult for Ms. Galereave and Ms. Zeldes to find time alone, until the very last day of the year.

The couple had planned a holiday weekend getaway with the children to a friend’s house at Mount Sunapee in New Hampshire. On New Year’s Eve day, they took the children tubing in the snow for hours, with an ulterior motive to wear them out. Once back at their friend’s house for the evening, they set the clocks forward three hours, happily allowing Jasmine and Jesse to stay up until “midnight.”

“This New Year’s they’ll be staying up as late as they want,” Ms. Zeldes said of their children. Then she laughed and added, “We may not make it up till midnight.”

For the record, Kiki and Susan didn’t stay awake to ring in the New Year. And neither did Jesse and Jasmine.