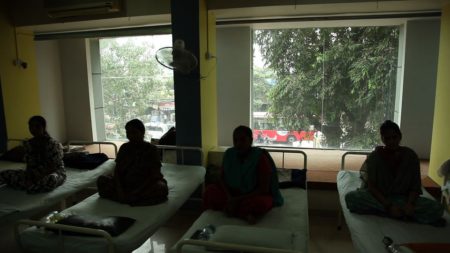 Update: A second public event has been added, also co-sponsored by Our Bodies Ourselves: “Systemic Violence or Informed Consent? The Politics of New Reproductive Technologies and Medical Experimentation in India” is the theme of the program at MIT on Tuesday, April 23, which will include the film screening and remarks by Sama’s co-founder, Sarojini N. The event will take place in MIT Bldg. 5, Room 217, at 7 p.m.

The rise of commercial surrogacy has led to numerous concerns and conversations involving women’s health and medical ethics. On Monday, April 22, Our Bodies Ourselves will sponsor a screening of “Can We See the Baby Bump, Please?” — a documentary film about commercial surrogacy in India that explores the ethical challenges.

The screening will take place at Boston University’s Bakst Auditorium at 5 p.m. and is free and open to the public. Co-sponsors include the Health Law, Bioethics and Human Rights Department of the School of Public Health and the student-led Health and Human Rights Caucus.

The global reach of medical tourism and commercial surrogacy spawns a range of clinics and practices across big cities and small towns in India. Anonymous, often with limited choice, woman’s labour is yet again pushed into the background. A whiff of immorality, the absence of regulation and the erasure of the surrogate’s experience collude to produce a climate of callousness. May we see the baby bump please? meets with surrogates, doctors, law firms,agents, and family in an attempt to understand the context of surrogacy in India.

The film was commissioned by the Sama Resource Group for Women and Health in New Delhi (view Sama’s blog for more on the film and a recent study on commercial surrogacy).

Sarojini N., the director and co-founder of Sama, will attend the screening and discuss her organization’s recent research on surrogacy practices, and strategies to address medical malpractice and the exploitation of women hired to be gestational mothers.

In 2012, Judy Norsigian, OBOS founder and executive director, traveled to Kathmandu to lead a workshop with Sarojini and Renu Rajbhandari, founder of the Women’s Rehabilitation Centre, OBOS’s Global Network partner in Nepal, on the growing popularity of cross-border surrogacy arrangements. Their presentation included effective strategies that could be used to educate and empower women.

“Already a booming business in India, where estimates suggest that 25,000 couples a year travel to arrange surrogacy contracts and there are about 1,000 surrogacy centers, this practice is soon expected to extend to Nepal, where poor women with limited economic opportunities will likely be attracted by the prospect of earning money by bearing children for others,” wrote Norsigian.

Read about her experience and learn more about the growing market in cross-border reproductive health care.