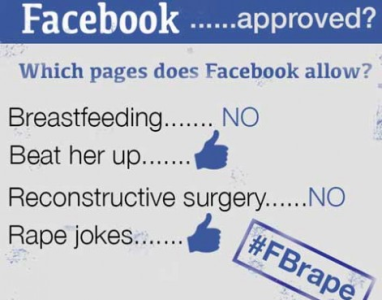 Last week, Women, Action and the Media (WAM!), The Everyday Sexism Project, and writer/activist Soraya Chemaly — with the backing of more than 100 organizations, including Our Bodies Ourselves — issued an open letter to Facebook calling for the social media giant to address hate speech targeted at girls and women.

Facebook pages that had been allowed, despite the company’s existing anti-violence content policy, featured depictions of men kicking “sluts,” images of beaten and restrained women, and numerous rape jokes. A link to examples is provided on this WAM! page.

Smartly, the #FBrape campaign asked supporters to contact advertisers whose ads appear alongside this content, noting that “advertisers should be aware that their brands will appear in positions that sponsor content that mocks, trivializes or promulgates gendered violence.”

Campaign leaders also emphasized that the existing reporting functions were insufficient, providing clear examples where Facebook moderators failed to remove reported content. Meanwhile, we have witnessed instances in which pages created by women that feature photos of moms breastfeeding or health information graphics have been banned.

Some companies responded positively, agreeing to pull their ads from Facebook until it takes real steps to address and remove pages that promote gender-based hate speech. Other companies, including Dove, said that while they object to the content, they could not control placement of their ads — which is why better action on Facebook’s part is necessary.

On Tuesday afternoon, after supporters sent more than 60,000 tweets and 5,000 emails to advertisers and Facebook, Facebook made an official response to the campaign, committing to the following actions:

You can read the delighted response from the campaign organizers, along with lots of media coverage. And, hey, the campaign made The New York Times — the business section, no less, rather than being placed alongside more “lifestyle”-oriented content where stories that affect women often appear.

Big congrats to WAM!, Everyday Sexism, Chemaly, and everyone who worked to call attention to this issue. One look at the comments on Facebook’s statement reminds us that there is a long way to go toward making the internet a less hostile place, but this is a great step forward.