You know when you’re feverish and you overhear bits and pieces from the news and it all swirls together in headache-fueled song? That’s how I spent a good part of February. I’m still coming to terms with the fact that covering prenatal testing has been called into question, or that Virginia legislators thought it would be cool to mandate transvaginal ultrasounds for women seeking abortions — at least until Gov. Robert McDonnell saw his VP hopes sink lower every time the word “transvaginal” was mentioned (the Virginia House passed an amended bill today requiring external ultrasounds instead).

At one point I assumed Komen must be behind all of this — a PR maneuver to distract from the Planned Parenthood blowback — but that, too, was the fever talking. Reality was far harsher: Republicans had set the cultural clocks back to 1950.

Consider this bit of political history, courtesy of Ann Gerhart:

“We need to take sensationalism out of this topic so that it can no longer be used by militants who have no real knowledge of the voluntary nature of the program but, rather, are using it as a political stepping stone,” said George H.W. Bush. “If family planning is anything, it is a public health matter.”

Title X, the law he sponsored that still funds family planning for the poor, passed the House by a vote of 298 to 32. It passed the Senate unanimously. A Republican president, Richard Nixon, enthusiastically signed it.

Cable news channels played into the time warp, inviting almost twice as many men as women onto news programs to discuss women’s access to contraception — a huge topic thanks to a very small group, the U.S. Conference of Bishops. Jennifer Pozner, executive director of Women in Media and News, gives those media figures some depressing context:

The twitterverse seemed shocked to learn that female experts were sought out as commentators only 38 percent of the time on a story about women’s health. As a media critic, I was surprised, too—because that’s actually a higher percentage of women’s voices than typically heard across all news categories, not just in stories involving women’s bodies.

To understand institutional sexism within the media, look no further than the systematic sidelining of women’s perspectives in corporate news and public affairs programming. Women are a paltry 14 percent of all guests on influential, agenda-setting Sunday morning news shows on ABC, NBC, CBS, FOX and CNN—more than half of whose episodes feature no female guests at all (White House Project). The disparity is just as stark in nightly news, where women are 19 and 27 percent of cable and network news sources, respectively (Pew Project for Excellence in Journalism).

A new report from the Women’s Media Center paints a similarly bleak picture.

I’ve been frustrated, too, by the lack of useful information. Often (mostly) male anchors and guests ruminate over the politics of women’s health without bothering to fact-check the pompous statements and accusations, letting misinformation sit uncontested. 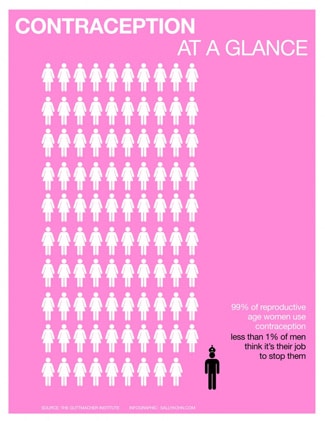 But there are signs of relief. While print/online publications and public radio are doing a better job than television at presenting the facts (see Erika Christakis’s smart column in Time magazine on the birth control debate and the rise of unintended pregnancies, and Irin Carmon’s longer analysis in Salon), TV news has shown some improvement.

In the wake of GOP candidate Rick Santorum’s harmful claims, I was grateful to see Marjorie Greenfield, a professor of obstetrics and gynecology at University Hospitals Medical Group and a longtime contributor to “Our Bodies, Ourselves,” address the importance of insurance coverage for prenatal testing Tuesday on MSNBC. She explained the difference between routine screening tests, such as ultrasounds, and more specific diagnostic tests, such as amniocentesis, which can determine whether a fetus has certain genetic conditions. Most women who are offered amniocentesis are carrying healthy fetuses, she said, so in the vast majority of cases, testing provides reassurance.

Greenfield noted that when she discusses amniocentesis to her patients, some are certain they would terminate a pregnancy if the fetus has a genetic anomaly such as Down Syndrome; others are sure they would not. In the middle are women who don’t have a clear position but who want more information so they can decide, with their families and physicians, the best course of action. Families may turn to support groups or specialists to learn how to prepare for a child with particular health challenges, or, if the genetic anomaly is fatal, arrange for hospice care.

Amniocentesis is expensive, often costing several thousand dollars. If it were not covered by insurance, many women would be unable to obtain the facts they need to make informed decisions.

That brings us to class issues that are rarely discussed, even though the intersections of race, class and gender are unavoidable in most any discussion about women’s health. So let’s cheer for Melissa Harris-Perry, a gifted debater, who is now hosting her own two-hour news program Saturday and Sunday mornings on MSNBC. Harris-Perry made her public intellectual name as frequently the only pundit to complicate solely political horse-race debates by providing a broader social context.

Additionally, Pozner notes that Harris-Perry is “the first black progressive woman to ever solo-host her own news and politics show on a major corporate TV news outlet.” And she isn’t giving up her day job — the Tulane professor is also “the first scholar to teach a full course-load during the week, and grill politicians and pundits on live TV over the weekends.”

This past weekend featured a discussion of gender roles and positions of power in religion and in Congress. Harris-Perry started with a wonderfully nerdy look at how schema affects our attitudes and expectations of who gets to be a leader — and the importance of changing the picture. And it might be good to start with our House — and Senate. Consider: Women comprise only 17 percent of the U.S. Senate and 16.8 percent of the House membership.

Harris-Perry also took on Virginia’s anti-women push — three bills that deal women a losing hand, including the aforementioned transvaginal probes for women seeking to have an abortion; Medicaid restrictions that would force poor women to carry pregnancies to term when the fetus has an incapacitating deformity or mental deficiency; and personhood legislation that could criminalize contraception and outlaw abortion.

There is quite a good amount of organizing going on against these and other attacks on women’s rights and health — including a silent protest this week at the Virginia state capitol and this-just-in news about a march on Washington on April 28.

A number of women’s health groups have formed the Coalition to Protect Women’s Healthcare. It’s new, and it will be interesting to see where it goes. Member groups are organizing visibility events this week at the district offices of members of Congress — especially those who have been promoting religious employer exemptions. You can visit the site for facts about contraception and sign a pledge calling for insurance coverage of birth control, no matter where women work.

Visit Pinterest much? Check out The War on Women page, started by Hello Ladies, for a running catalog of stories and images (love the description: “Ladies, we are under attack. Stay informed. Stay vocal. Run for office.”).

And there’s much needed humor, and not just from the typically awesome Jon Stewart and Stephen Colbert. See The Second City’s Network take on contraception hearings below.

Laughter really is the best medicine.