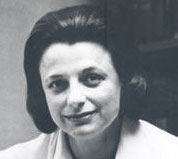 On the heels of Rachel’s post yesterday on the medicalization of sex and sexual healing (vibrator/egg beater? oh my), I wanted to mention a petition we just learned about to honor psychologist Virginia Johnson for her pioneering work on sexuality.

Johnson teamed with William Masters in the 1950s to study the nature of sexual response and sexual disorders. Together they wrote “Human Sexual Response” (1966) and “Human Sexual Inadequacy” (1970). Though they began their work at Washington University Medical School, the university has not celebrated their contributions to the field.

Masters died in 2001, and Washington University’s Student Forum on Sexuality, a student group dedicated to promoting the discussion of sexuality on campus, wants to make sure Johnson is honored in 2010, as she turns 85.

From the petition (which is open to anyone to sign):

Despite the controversial nature of their work, Virginia Johnson and William Masters revolutionized the way the world thought about the physiology of sex. Yet their names remain virtually unknown as a part of Washington University history. We want to uncover the legacy of this innovative duo, and more specifically, we want to honor Virginia Johnson’s lasting contributions to the field of sex therapy by requesting that she receive an honorary degree from the place she started her work, Washington University in St. Louis. Please show your support in this effort by signing this petition.

Some of the controversy relates to their studies in the 1960s and 1970s on whether homosexual men and women could be converted. Their contributions to demystifying female sexual response and legitimizing sexual responsiveness among older adults, however, are cornerstones of contemporary sex therapy.

Masters and Johnson’s work led to the four-stages of the human sexual response: excitement phase; plateau phase; orgasm; resolution phase. Their findings also revealed that while men undergo a refractory period following orgasm during which ejaculation is not possible, there is no refractory period in women. Bottom line: We can thank Johnson for confirming our ability to have multiple orgasms.