The Costs of Physical Love

Excerpt from Sacrificing Our Selves for Love by Jane Wegscheider Hyman and Esther Rome, in cooperation with The Boston Women’s Health Book Collective. 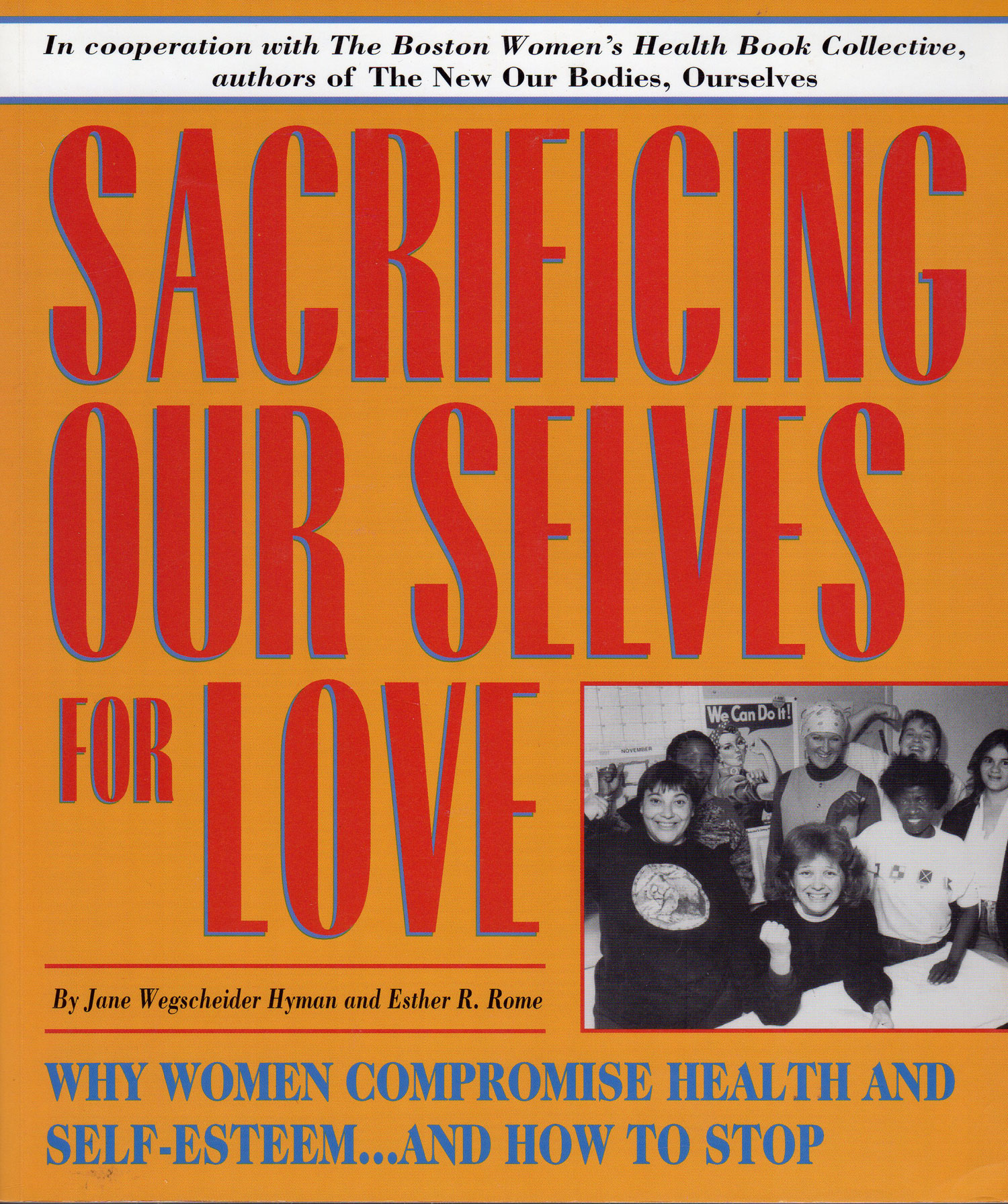 Every day, women put themselves at risk of infertility, illness, and death by having sex without protection against disease. There are more than twenty-three sexually transmissible diseases, with effects ranging from abdominal pain to death. This chapter examines three diseases that can be fatal: cervical cancer, which is primarily caused by human papillomavirus (HPV); pelvic inflammatory disease (PID), mainly caused by gonorrhea or chlamydia; and acquired immune deficiency syndrome (AIDS), which is caused by human immunodeficiency virus (HIV). The chapter also examines the difficulties we have in approaching the subject of safer sex; the government’s inadequate approach to prevention; and some of the larger social forces that have slowed efforts to halt the spread of these diseases.

SUBSERVIENCE IN THE BEDROOM

One of the most powerful ways of feeling needed and wanted is to know that someone desires to touch and kiss us and to have sex with us. Such physical affection is an affirmation that we are accepted and loved. For many of us, when a love relationship ends, the loss of physical intimacy is hard to bear. It is not surprising that we often find ourselves unwilling to jeopardize, alter, or delay an opportunity to feel loved through physical intimacy, even at the risk of our health: “[Our] sense of self becomes very much organized around being able to make and then to maintain affiliations and relationships. Eventually, for many women the threat of disruption of a relationship is perceived not as just a loss of a relationship but as something closer to a total loss of self.”1

However, we are at a disadvantage in heterosexual love relationships because of the long tradition of male dominance. The right to dominate women is considered the essence of maleness in some societies. Also, some religious traditions, laws, and social mores still support the idea that our marital duty is to be sexually available to our husbands.

Being assertive, a traditionally “male” attribute, may seem most difficult or out of place in the bedroom, one of the last places where we still adhere to the traditional female ideal. Even when we habitually stand up for ourselves and deal honestly and directly with friends, as soon as we become sexually involved, our assertiveness often weakens. We lose our sense of who we are and what we want.

For example, one woman physician informally asked about a hundred of her female colleagues whether they had equal decision-making power in the bedroom. Ninety percent said no.3 Women physicians are among the most highly educated and well-paid women in the United States. They are accustomed to being assertive and to making crucial decisions. Their sexual subservience highlights women’s deeply rooted habits and fears.

Part of this subservience in the bedroom involves our wish to please — “Giving you pleasure is my pleasure.” Giving pleasure is unquestionably part of the joy of lovemaking. As women, we often ask ourselves if we are giving enough and are upset if we feel we are not. Thus, giving pleasure can be a joy that seems worth the sacrifice of our own needs and preferences. But such giving also puts us at risk of be- coming servants to another person’s desires, no longer recognizing and acknowledging our own needs or concerns for our health.

I can almost physically feel my identity going —  I slip back into an old passive mold. I don’t have anything to say about what’s happening. It’s just happening to me.2

Love is the most beautiful acknowledgement and fulfillment of who I am as a woman, and passionate lovemaking is a deep expression of love. I know that someone who truly loves me would never do anything to hurt me.

When we lose our sense of self, we tend to stop thinking for ourselves and leave actions and decisions to our partners. Our preferences, objections, reservations, or fears may remain unspoken, with consequences for our self-respect, sexual pleasure, and health. We may fail to protect ourselves against sexually transmissible diseases because we want to please or because we feel disempowered.

Speaking up about safe sex can also be hard because of the stigma attached to sexually transmissible diseases. Many of us distance ourselves from diseases by trying to believe that they happen only to other people, especially people different in some way: sexually, culturally, racially, or behaviorally. And sexually transmissible diseases raise questions about our most intimate behaviors: whether we have sex, how often, with whom and how, and what kind of protection we might use. For example, cervical cancer and PID have long been associated with behavior judged immoral for a woman, though this stigma has faded somewhat. The social ostracism that results from testing positive for HIV, however, is pronounced.

Because we do not want to identify with a stigmatized group, some of us refuse to realize that we may be at risk of contracting a sexually transmitted infection. Or we may understand the risk but be reluctant to bring up the subject of safe sex — it may seem to us that we are accusing our lovers of a social sin.

Protection against disease usually involves a physical barrier. For many women, this barrier symbolizes an emotional barrier or a lack of trust and makes protection with our partners difficult. However, love and trust are no protection against bacteria, viruses, and other infectious microorganisms. What happens at the microscopic level has nothing to do with trust or intentions.

Most of the microorganisms that cause sexually transmissible diseases, including gonorrhea, chlamydia, and AIDS, are fragile outside the body. If the fluid they are in dries, these organisms die; they need the warmth, moisture, and nourishment of the human body to survive. The human papillomavirus (HPV) is an exception since it appears to be able to survive in the skin around and on the genitals. Most sexually transmissible diseases spread from one person to another only if the bacteria or viruses can move directly from one body into another, or if direct skin contact is made between vulnerable parts of the body. We can become infected through intimate physical contact, such as unprotected vaginal or anal intercourse with an infected man or unprotected oral sex with an infected woman. (For information on reducing the risk of infection, see Chapter 11.)

After all of the hoopla I went through with cervical problems, you would think I would know more than most people. In fact, I’m surprised to hear that cervical cancer is related to a sexually transmitted virus. The medical community that I dealt with didn’t explain it that way. My doctor specifically said, “We don’t know what causes this.”

In unprotected heterosexual sex, women are generally at greater risk for contracting sexually transmissible diseases from men than the other way around. A woman usually retains the ejaculate from an infected man in her vagina or rectum for a number of hours, while a man is in contact with a woman’s fluids only until his penis dries off, and the quantity of infected fluid that a man might get inside his urethra is much smaller. Perhaps for that reason the infection is easier for his immune system to destroy. In a single act of unprotected sex with an infected partner, a woman’s risk of contracting chlamydia is 40 percent, while a man’s risk is 20 percent.5 Women are as much as 17.5 times more likely to contract HIV from a man than vice versa.6 Gonorrhea, chlamydia, HPV, and HIV all can be transmitted at certain times to a woman’s fetus either during pregnancy or birth, and in some cases, both. In addition, HIV can infect a nursing baby through breast milk from an infected mother.

Could I Have a Sexually Transmissible Infection?

Nearly every woman who has ever been sexually active with a partner could have a sexually transmissible infection. Even if you have had unprotected sex only once, your partner’s prior experiences may put you at risk. To demonstrate how vulnerable all women am, ask yourself the following questions.4 (For AIDS only, the time period to consider begins with 1977.)

Any yes answer means that you are at risk for having a sexually transmissible infection. (Few can answer no to all these questions.) If you have answered yes to any question, please read “Detection and Treatment” in Chapter 11.

Excerpt from “Sacrificing Our Selves for Love” by Jane Wegscheider Hyman and Esther Rome, in cooperation with The Boston Women’s Health Book Collective. © Crossing Press: 1996

Read additional excerpts from “Sacrificing Our Selves for Love”

Sign up for our newsletter to receive news and updates.