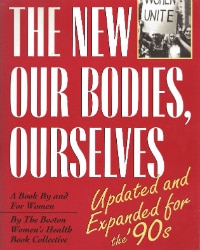 The New Our Bodies, Ourselves, 25th Anniversary Edition (1996) 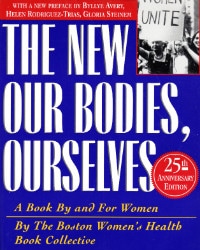 I  TAKING CARE OF OURSELVES
Introduction: Wendy Sanford, with special thanks to Nancy P. Hawley and Jane Pincus.

2. Food
By Esther Rome, with special thanks to Marsha Buttman and Vivian Mayer. This chapter in previous editions was called “Nutrition and the Food We Eat” and was written by Judy Norsigian. 1992 Update by Esther Rome with help from Bonnie Liebman, Demetria Iazzetto, Ruth Palumbo, Tricia Copeland, Christine Rugen and other staff members of ATTRA.

4. Women in Motion
By Janet Jones, with special thanks to Pat Lyga, Judith Stein and all the wonderful women who shared their experiences, feelings, thoughts, hard work and dreams, and so made this chapter possible. This chapter in previous editions was written by Janet Jones and Carol McEldowney. 1992 Update acknowledgment: Mary Lee Slettehaugh, Melpomene Institute.

10. Loving Women: Lesbian Life and Relationships
By the Lesbians Revision Group, including Barbara A. Burg, Loly Carrillo, Sasha Curran, J.W. Duncan, Buffy Dunker, Deanna Forist, D. Hamer, B.J. Louison, Judy Norris, Gwendolyn Parker, Mariana Romo-Carmona, Lynn Scott, Ann SHepardson, and several women who must, with sadness and anger, remain anonymous to protect our jobs, family relations, living situations or parenthood. With special thanks to the Cambridge Women’s Center for use of their archives, Jill Wolhandler, the Lesbian Mothers Group(at the Cambridge Women’s Center), and to the hundreds of lesbian women who wrote letters in response to the previous lesbian chapter. This chapter in previous editions was called “In Amerika They Call Us Dykes” and was written by a Boston Gay Collective. 1992 Update by Amy Alpern, with help from Mary Bowe, Holly Ellison, Brenda Reeb and Wendy Sanford.

Introduction
Based on the work of Joan Ditzion and Janet Golden.

16. If You Think You Are Pregnant: Finding Out and Deciding What to Do
By Jane Pincus and Jill Wolhandler

18. New Reproductive Technologies
By Ruth Hubbard, with Wendy Sanford. With special thanks to Gena Corea. 1992 Update by Diane Clapp, with Judy Norsigian.

21. Postpartum
By Dennie Wolf and Mary Crowe. With special thanks to Robbie Pfeufer. This chapter in previous editions was written by Paula Doress, Vilunya Diskin, Esther Rome and Marty Ruedi. 1992 Update of postpartum depression and resources by Alice LoCicero.

VI  SOME COMMON AND UNCOMMON HEALTH AND MEDICAL PROBLEMS

24. Some Common and Uncommon Health and Medical Problems
All sections below are by Mary Crowe, except where otherwise indicated. Most sections are based on work by Sarah Berndt, Edith Butler-Hallstein, Alice Downey, Susan Keady, Sandra Malasky and Betty Mitchell (all of the New Hampshire Feminist Health Center).

VII  WOMEN AND THE MEDICAL SYSTEM

26. Organizing for Change: U.S.A.
By Judy Norsigian, with Jane Pincus. With special thanks to all the groups who sent us descriptions of their history, projects and ways of working together. This chapter in previous editions was called “Coping, Organizing, and Developing Alternatives,” written by Norma Swenson. 1992 Update by Judy Norsigian and Rachel Lanzerotti.

Sign up for our newsletter to receive news and updates.